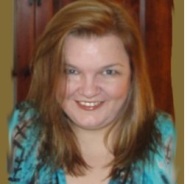 Another prolific book reviewer and facebook group activist in her own right, it gives me great pleasure to present my first review of one of her books, Goin Postal & The Creek by Rhoda D’Etorre…

Rhoda D’Ettore was born in Woodbury, New Jersey, into a family of 5 siblings–which has provided her with plenty of comical material. She began working at the United States Postal Service at 25 years old, and over the past 15 years has accumulated many humorous stories about situations that the public never gets to know about. Her first eBook, “Goin’ Postal: True Stories of a U.S. Postal Worker” was so popular that readers requested it in paperback. Recently, she published the humorous “Goin’ Postal” in paperback along with another story entitled, “The Creek: Where Stories of the Past Come Alive”. Combining these two into one book may seem strange, as one is humorous and the other is a heart wrenching historical fiction, however, doing so proves to the reader Rhoda D’Ettore’s versatility.

Rhoda D’Ettore received her degree in Human & Social Services while working at USPS, has travelled extensively, and loves history. Over the years she has volunteered for several community service organizations, including fostering abused and neglected dogs for a Dalmatian rescue.

Further links to Rhoda D’Etorre’s wring can be found at:

(Available as an eBook, paperback, and as an audio book from Amazon) 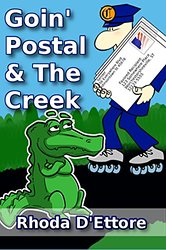 I first decided to read this book out of curiosity of the cover and the two different titles listed there, probably not the best of reasons I know but what a little gem it turned out to be. Here you get two very different stories for the price of one, the first being a series of side splitting snapshots and anecdotes of the author’s time working in the US postal service, and in the second story, The Creek, the reader is treated to a delightful family and local history of stories from in and around a creek in New Jersey dating back to the American civil war to the present.

In Goin Postal, the author takes us through the trials and tribulations of being a temporary and then permanent worker in the postal service; it’s not so much a story in the conventional sense but more a collection of memories and hilarious anecdotes loosely linked via an amazing array of characters in the form of her fellow workers. Her colleagues are every bit as varied and funny as the anecdotes themselves, ranging from traumatised Vietnam war veterans, a mad forklift driver chasing the white devils, a big hearted bisexual supervisor, and a Russian history buff, not to mention Aunt Gertrude and a bigoted Nigerian. Despite the racial and cultural diversity reflecting the huge melting part of immigrants that made America the country it is today, for the most part they all get along as one giant though often somewhat dysfunctional family. The author’s time with the postal service starts with the time consuming FBI checks for her employment, but once passing them she finds herself immersed in a truly mad and chaotic workplace, filled with its very own sub cultures including betting on who will be the next person to go on a shooting spree, or ‘goin postal’ as it might be called, dodgy dvd and arms sales, and a host of other ‘have to be there’ to be believed scenarios. The characters and language are as colourful as you can imagine, reflecting the working class diversity and backgrounds of the postal workers. The day to day humdrum of the work is punctuated with numerous pranks and hilarity, not to mention the bizarre situations that arise from the many strange things people try to send through the post, a severed head being among them, but despite the seeming madness of the workplace, in the true tradition of the Pony Express, underpinning the chaos is the workers’ determination that the post will go out no matter what, even amid the security and horror of 9/11. The writing is sharp and witty, and in a style that perfectly complements of the comedy of what the author is describing, and for anyone who has worked in a menial shift environment will certainly be able to identify with much of the humour, and probably recognise similar characters from their own work places.

In The Creek the writing and subject matter takes a surprisingly more poignant direction; the reader initially encounters what at first impression comes across as a truly heart-warming and delightful tale of love and romance set against the backdrop of the civil war, only to have that perception completely turned its head. The reader is then transported through a succession of stories carrying on from the first, taking the reader through the depression of the 30s, prohibition, two world wars, and the civil rights struggle, to almost the present day, covering love and romance, murder, bigotry, the Black Panther movement, and even ghostly apparitions. Although the stories through the decades take very different turns, they retain the creek as a sort of anchor connecting them all, and eventually conclude in such a way as to tie them all together really well. As I’ve said, the writing and content in the Creek is somewhat different, but still retains an entertaining story telling style throughout. Goin Postal and the Creek might seem like an odd combination at first but they subtly complement one another; whereas as in the former in its portrayal of the incredible diversity the author has presented a snapshot of American society as a whole, so too in the latter, she has presented the reader with an entertaining portrayal of how America has evolved to what it is today. 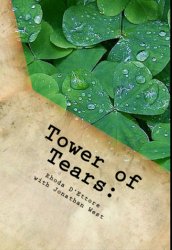 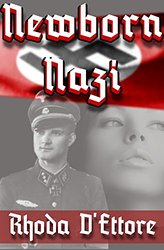 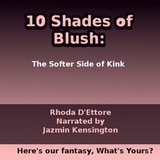 a mystery lover's exploration of the best reads in the crime genre.