← A to Z Stories of Life and Death, by D.Biswas – Book Review
Lottery Loser… → 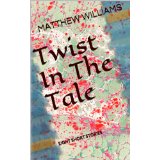 Twist In The Tale, by Mathew Williams (available on Amazon kindle)

A great little collection of short stories, each with an unexpected ending that surprises or makes you smile, or both. There’s a nice variety of stories here, from the heart-warming to the slightly dark, so the reader is never quite sure what they’ll be getting next, but is never disappointed. One particular story, ‘Only Make Believe’ was as gentle and heart-warming as is hard to imagine, and, without giving anything away, the final line brought as wide a smile to my face as I can remember.

If I had to make one tiny criticism, and it’s nothing to do with my enjoyment, it would be that I would have preferred a slightly more informative description in the amazon blurb as there really isn’t enough grab the ‘potential’ reader’s attention. And on a purely selfish note, I would have liked a few more stories to make for a longer read. Well worth reading…

Ebook & Self-Publishing?  Some personal thoughts on the matter…

Despite its success, the whole ebook and amazon kindle phenomenon has not been without its critics, and concerns about its effects on the more traditional publishing industry. It’s true that the advent of the internet and the rapid expansion of free or relatively inexpensive self-publishing via Amazon, Smashwords, blogging, and a host of others has resulted in a lot of, shall we say, ‘less than professional’ writing to be made available.

Proponents of traditional publishing might well argue that with a traditional and well known publisher, the reader is assured of the quality of the writing in advance? I don’t know about your experiences but for myself, I’ve read some pretty awful stuff in traditional print too, long before Amazon was little more than a barely known webpage.

In answer to the last point though, if a title and cover grab your interest, then both Amazon and Smashwords provide the facility to browse through free samples of whatever you’re considering buying. And since many of the books, including most of the classics on both Amazon and Smashwords are either free or in many cases, less than a few pounds, such arenas have made reading a lot more accessible and affordable for a lot of people. I know my own reading has doubled, if not trebled, in both quantity and variety since I got my Kindle.

Much of the early criticism of self-publishing was by way of comparison to ‘vanity publishing’, where hopeful writers might be lured into parting with thousands of pounds following exaggerated praise of their work and promises of best-selling success. But today? Self-publishing is completely free with little more than a few basic internet skills, and even without those skills, it can still be achieved with for little more than a hundred pounds or so. Yet still there is criticism that any amount of money aspiring writers might spend promoting their work is at best, optimistic, and at worst, delusional. But why? Not every amateur writer has aspirations of becoming the next Zadie Smith or Harold Robbins. For many, it’s just an enjoyable hobby, so why shouldn’t they spend whatever they like on it if it brings them satisfaction? Apart from writing, other hobbies of mine include cycling, outdoor pursuits, keep fit, sports, all of which I’ve spent money on over the years; if it’s acceptable for golfing and motor cycling enthusiasts to spend hundreds, if not thousands on their hobby, without the slightest hope or intention of profiting from it, why not writers too? Even bloggers, for whom their writing platform is the simplest and freest of all, might well spend a small amount for a premium theme to improve the look of their work.

The evolvement of the self-publishing arena can in many ways be compared to that of the music industry. In the past ten or fifteen years we’ve seen the virtual disappearing of all the traditional mediums of music. Vinal and cassette tape are now largely collectors items; even the CD is losing ground to the ipod and digital downloads. Many of today’s biggest recording stars started their careers building their audiences on the likes of Youtube and Myspace. And even the traditional method of ‘gigging’, is that so very different from blogging?

Whatever one might think of ebooks, the Kindle, Amazon, Smashwords, blogging, and many other forms of self-publishing, they’re all here to stay in one form or another. Let’s embarace and make the very most of them….

← A to Z Stories of Life and Death, by D.Biswas – Book Review
Lottery Loser… →

a mystery lover's exploration of the best reads in the crime genre.